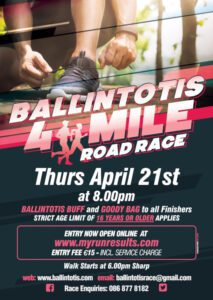 The 11th running of the Ballintotis 4 mile road race, hosted by Ballintotis Area Community Council and held in association with East Cork AC, will take place this year on Thursday April 21st (starting time 8pm.) The organising committee are delighted to be back again on the race calendar, following the enforced break due to the covid pandemic in 2020 and 2021.

In 2010, the first staging of the race took place and attracted 425 runners, a figure which at that time well exceeded the organisers’ expectations.

Our last race in 2019 which was our 10th anniversary race saw a record breaking 1240 finishers.

That aforementioned 2010 race got fund raising underway for Ballintotis Community Centre which has since been built and is now the hub of the race.. The event formerly took place in Castlemartyr, but East Cork AC moved the race to Ballintotis, which has proved a hugely popular location, with the venue boasting in excess of 1,000 participants on a number of occasions. The scenic 4 mile loop includes a lap of road bordering Loughaderra Lake in the closing stages.

Again this year’s race offers great value for money with a very attractive prize structure overall and a full list of category prizes in all age groups (1st 2nd and 3rd) as well as the opportunity to win one of the many spot prizes on offer.

Castlemartyr Resort will again sponsor the top prize of overnight accomodation for 2 people both the male and female winners.

Trabolgan Holiday Village have again confirmed that they will sponsor a Family Weekend Away or Mid Week stay for both the race runner up and ladies runner up. Once more Garryvoe Hotel Leisure Centre have come on board with a magnificent prize for the third runners home, in the shape of six months membership to their superb facility.

As well as the famous Ballintotis Buff again kindly sponsored by Simon Ahern of Ahern’s Centra, J.J Coppingers’, Midleton are again on board to help sponsor a goody bag for all finishers.

Registration is open on line from Friday February 4th. Registration costs 15 euro including service charge, with the option of availing of your race number being posted out for an additional cost.

In the inaugural race James McCarthy took top spot with a time of 19:54. McCarthy went onto win the race a remarkable eight times in a row, his best time being 19:23 set in 2016. Then in 2018 … a new man was on the podium as another East Cork A.C competitor Michael Harty won in style and in the process set a new course record of 19:15, with the previous record also being broken by Sergiu Ciobanu who was runner up. Our last race in 2019 saw a new name on the roll of honour – as yet another East Cork Man – Kevin O’Brien broke the tape in a time of 20.13.

The entry was a remarkable 1,170 runners in 2015. Irish Olympian Sonia O Sullivan was among those taking part that year following up on her previous visit in 2013.

Fellow Olympian Lizzy Lee from Leevale is the ladies course record holder (21:22), with her Irish International colleague Claire McCarthy posting the second fastest time around the course. Fiona Santry of East Cork A.C made it back to wins in the ladies race in 2019 to complete a fine double..

Anybody requiring further information on this year’s race can e-mail their query to [email protected] or call 086 8778182. .

***Updated race info will be issued nearer the event.