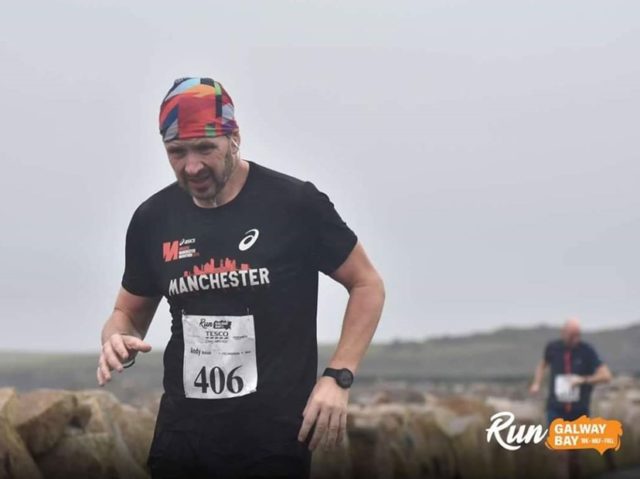 A visit to the city of the tribes

It was the Run Galway Bay 10k/Half-Marathon/Full marathon. I had done the half marathon for 3 out of the last 4 years and the 2015 half marathon was my first race of any description ever. This was my 5th marathon this year and about time I stepped up from the half in Galway. There was a slight concern earlier in the week based on the trajectory of hurricane Lorenzo that the race may be cancelled but, it never even came close to being called off. I stayed in Galway the Friday night in a cracking BnB on College road, about a 10 min walk from the start line and maybe 6 mins from Eyre’s square called College Crest House BnB. The owner Helen couldn’t have been more friendly or accommodating, usually breakfast is at 8 but I mentioned I was due to start the race at 8.30am and she got up early to cook me a fry for 6.45am. Large room, clean and comfortable and great value at €60. I was also able to leave my car key there for the duration and get changed thereafter.

I drove up from Limerick around 3.30 pm on the Friday, called to Tesco in Headford road for registration and to pick up t-shirt. Usual traffic congestion that Galway is famous for at peak time. A former colleague of mine, Feilim has relocated to Galway so planned to meet up for a bite to eat that evening and catch up. We went to an Italian in Salthill called Da Roberta’s. I usually like to get some pasta/specifically a carbonara the day before a marathon. Ordered carbonara and chips, I had asked for some chicken in the dish but was looked at like I had 2 heads, so it was just carbonara and bacon. Chips were dripping in grease, carbonara was average at best. The dish came with a free glass of prosecco which was very nice. Had a couple of beers in a bar down the road and was in bed for 9pm. My mate Feilim made the booking and he told me a funny story when he books restaurants for food. He never gives his first name (Feilim) and it normally causes confusion for the person taking the booking particularly if their first language isn’t English, so he always uses the name “Mike” as it’s easier and saves a few mins explaining how to pronounce and spell Feilim – I thought it was funny 😊

Got up at 6.15am on the morning of the race, grabbed a shower, got dressed and went down for breakfast at 6.45am. I was back in room getting my gear ready for the run and left the house at 7.45 for short stroll to the race start. The day was overcast and drizzly, a complete contrast to the Friday eve weather which was cracking, sunny without a puff of wind. Race build up was underway, queued for obligatory portaloo visit and joined the gang of similar minded folk in the starting paddock for the off. Started bang on 8.30am.

The route for the full is 6 laps, 2 short ones followed by 4 long ones. You start at Claddagh, run along Grattan Rd as far as the Promenade Road and turn back along the path before commencing your second short lap. Four full laps follow; a full lap consists of following the closed road through the heart of Salthill as far as the Barna Rd junction, then return via the back of the Golf Club and along the promenade back to the Claddagh. 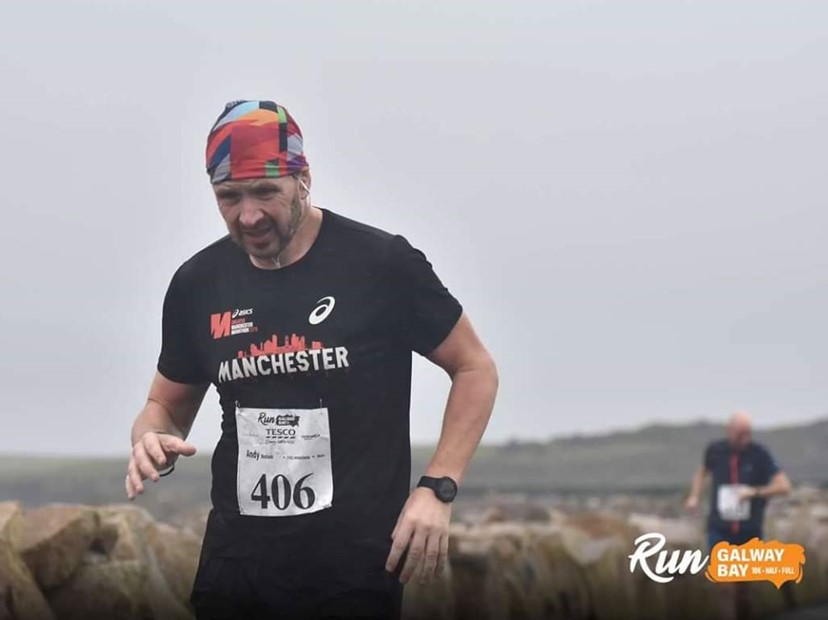 I was dreading the prospect of laps if I’m being completely honest as I prefer a full route that’s just the one loop, but these laps were actually grand. I knew there was 6 of them and as I ticked each one-off, the next one became a little easier. The route is very flat and its unquestionably a PB course weather dependent. The weather, unfortunately, wasn’t great for the duration of the race. Wind in places was strong enough and it drizzled intermittently for the full course. The water stations and sweets are conveniently located along the loops so that you’re never too long without a drink and they came in bottles or cups. The marshals were very good on the day in particular with those weather conditions.

I started the race with the attitude that I would go for a PB, (previously Limerick at just over 3.35 is mt PB), but for a finish, the wind just drained me so that I tapered off toward the last ¼ of the race. I was on track for 3.30 until about 9km to go. I eventually finished just over 3.35, maybe 20 or so seconds from a technical PB. Didn’t really mind, solid run and was happy to get it finished given the weather.

All in all, this is a good race. The 3 times I did the half previously the weather was good, the weather this year was just unlucky. Support was also good given conditions, the course is very flat and I would definitely do it again. Next up for me was supposed to be Dublin the end of October, but I have traded that for a marathon in Switzerland in Lucerne – this will be my 6th marathon.