Fionnuala McCormack (Kilcoole) hailed ‘a great day for the family and the club’ as she routed the field to win the women’s 8,000m race with her sister Una Britton in third at the Irish Life Health National Cross Country Championships in Abbotstown on November 24th.

There was an equally proud and emotional moment for Liam Brady (Tullamore Harriers) as he won the senior men’s 10,000m crown in a mud fest on the Sport Ireland National Sports Campus.

It was a swift u-turn after the finish for McCormack to sprint back down the finishing straight (outside the course) and cheer on Una to a cherished bronze medal – her first senior cross country medal.

Michelle Finn finished fifth to lead Leevale home to defend their team title. Sorcha McAlister (Westport) worked through well to win the U23 race in 31:57.

Sarah Healy (Blackrock) didn’t run in the end with a virus but didn’t take anything away from McCann’s smooth runner. “I’m so happy,” said McCann afterwards who sealed automatic selection for the European Cross Country Championships (the team will be finalised tomorrow) in Lisbon on December 7th.

The last race of the day was the senior men’s 10,000m and there was a good lead pack for the first half of the race until Liam Brady pulled clear and held off Brian Fay (Raheny Shamrock), the first U23 athlete across the line, by five seconds in an exciting final lap. Sean Tobin (Clonmel) finished third in 33:05.

This was Brady’s first national senior title to add to U20 and U23 crowns. “I wanted it, I badly, badly wanted it,” he said emotionally afterwards.

Brady credited his father, Kevin, for a stirring pre-race speech. “He said ‘I’ll have an ambulance waiting for you at the end,’ said Brady who continued on “thankfully I didn’t need it.” Clonliffe Harriers brought back the senior men’s title to Morton Stadium to break Raheny’s dominance of the last three years.

U23 (combined with senior – no team result)

U23 (combined with senior race – no team result) 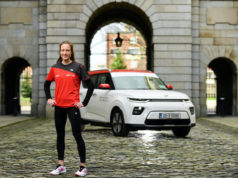 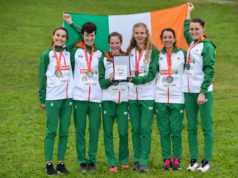