Home Advice Jamie Gane Adaptive Athlete – Why I Run After 14 Years in... 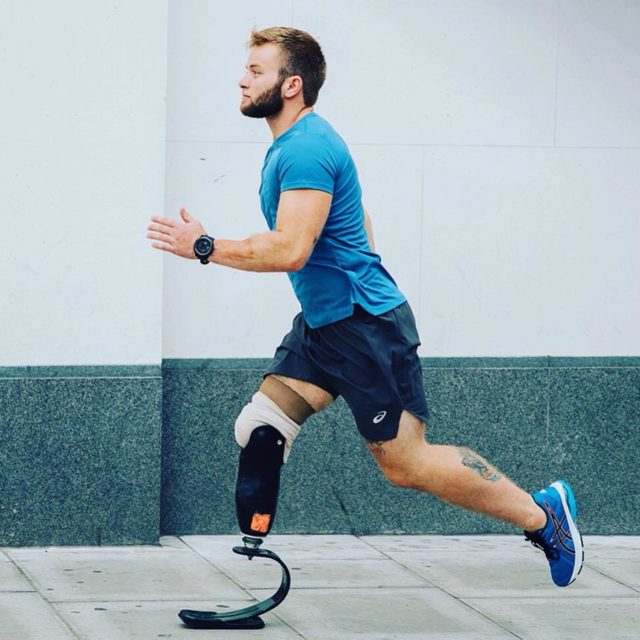 Feeling the breeze in my hair, seeing the world from a foot taller and the ability to conquer the previously unconquerable – all experiences I felt when I started running after 14 years in a wheelchair.

When I was a child, I would never run in the playground. While my friends were playing ‘tag,’ I was sat on the sidelines unfortunately unable to play at their level. Despite being quite strong for my age and able to throw a cricket ball for miles, I could never run. I remember an old photograph from a sports day where my peers are all close to the finish line while I was struggling at the halfway point.

My childhood was full of opportunities but also full of physical pain and limits. Growing up, I was swarmed with operation after operation, trying to solve a chronic pain condition that had started following on from a trip to Disney in the states when I was about 9 years old.

By the time I was about 12 years old, I was using a wheelchair as my condition continued to deteriorate. By my 16th Birthday, I had already undergone over 25 procedures/operations and was certainly near the end of my tether.

The Road to Amputation

Within a routine appointment with my specialist, he recommended a series of operations with amputation as a possibility for down the line. After hearing the word ‘amputation,’ my heart immediately sank but the little cogs in my mind started moving. I had a foot that wasn’t working and why not just remove it in order to get a new one – everything started to make sense.

My doctors were very set in their paths and were certainly not keen on amputation but the more research I undertook, the more I realised how controversial my amputation was going to be. By this point, I had developed a condition called Complex Regional Pain Syndrome (CRPS) and was unable to use my foot at all. It was purple in colour and the wind, rain, shoes, and socks were too much for it. The risk was that with the removal of the foot, it wouldn’t necessarily remove the pain so the doctors were reluctant to amputate. 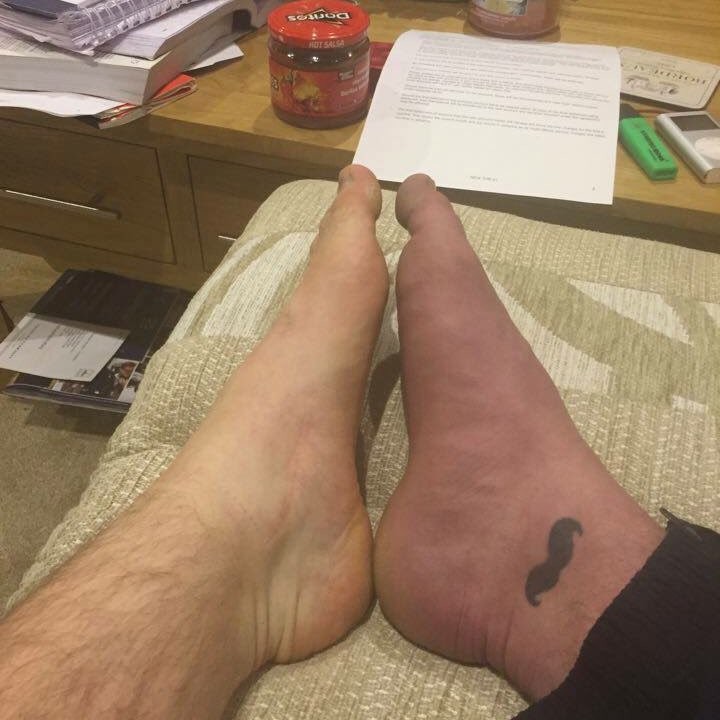 After 6 years, I finally found a surgeon who was willing to amputate and perform my 36th operation. My partner and I travelled 6 hours north in September 2016, to the one surgeon who was able to potentially change my life for the better. In order for my surgeon to agree to amputation, I needed to have 2 years of counselling as well as meeting other criteria such as speaking to other amputees. The accumulation of years of hard work, countless operations, and difficult decision-making had come down to this one day. I was wheeled down to surgery and after a quick injection, I was one sleep away from the start of my new life.

Life After the Amputation

A post shared by Jamie Gane, Adaptive Athlete (@jamieganeadaptiveathlete) on Apr 9, 2019 at 2:34am PDT

I remember waking up and feeling as though a weight had been lifted (after confirming that they had amputated the right leg). The next day, I felt a rush of energy, as I was no longer in pain. I remember rushing around the hospital in my wheelchair no longer afraid of air on my foot or getting it bashed by a bystander.

Despite spending 2 months in hospital with a lot of complications with my stump and not being able to be fitted with a prosthetic leg by the NHS, I went privately in June 2017 and was fitted with a walking leg.

The clinic had told me to be extremely careful with my walking leg and use two crutches for the first week and to eventually go down to unaided after three-or-so weeks. Despite this, I felt great: Within a few days I was walking unaided (obviously taking it slowly and carefully) and after a month of walking, I was ready to run.

Running After 14 Years in a Wheelchair 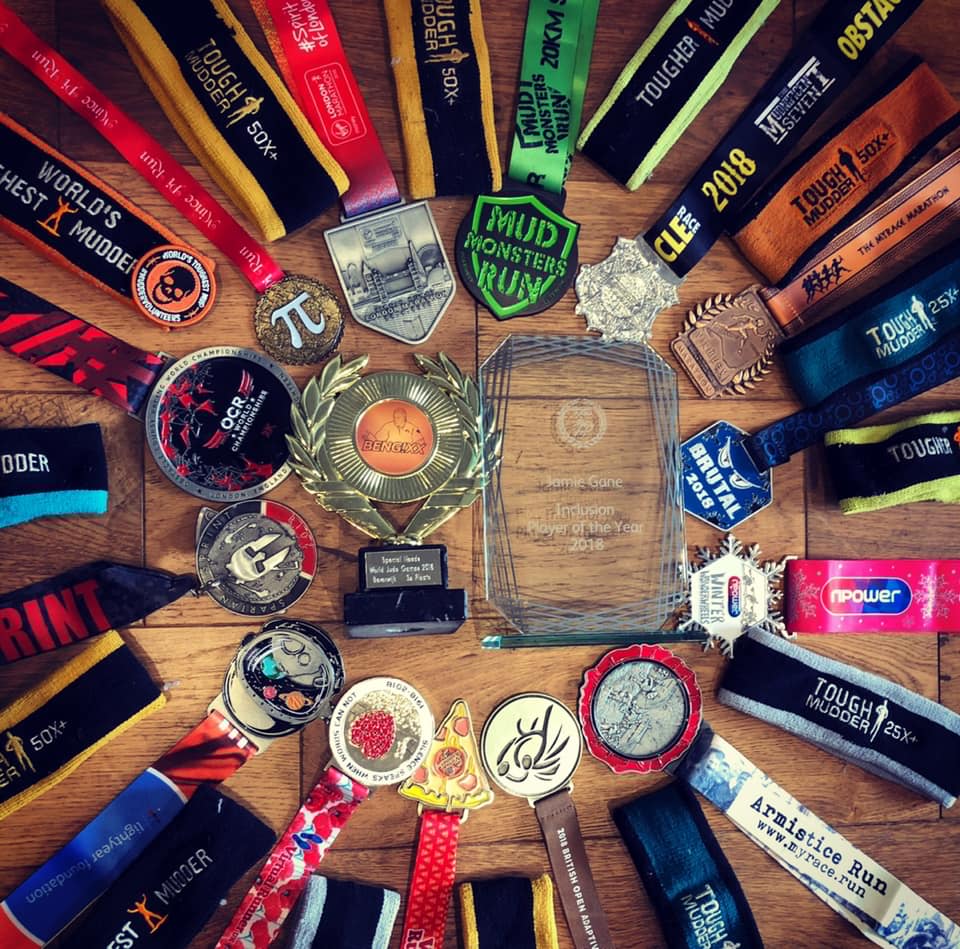 Already, my mindset was changing and I had started to see the world from a much taller level. No longer was I at the height of a child, I was walking and was going to be running as a young man. I threw myself in at the deep end and started with Tough Mudder (10-mile courses), initially walking most of the course until I could eventually run most of it.

In September 2017, just 2.5 months after I started running, I needed to have some corrective surgery on my stump so, in January 2018, I came back in with an eager mindset and was determined to make 2018 my crazy event year.

Travelling all across the world, from Ireland to America, Dubai, Nepal, Germany and completed events that I never thought would be possible.

The London Marathon, 36 Tough Mudder events, the World Judo Games, a 24-hour endurance obstacle race – every weekend was packed with events and activities.

2018 was a fantastic year, my first year of running where I hit milestones that I could never have dreamed of. I was named British Judo’s ‘Inclusion Player of the Year,’ and am currently ranked top three in the world for Judo – crazy to think that I’ve just been running for 18 months. 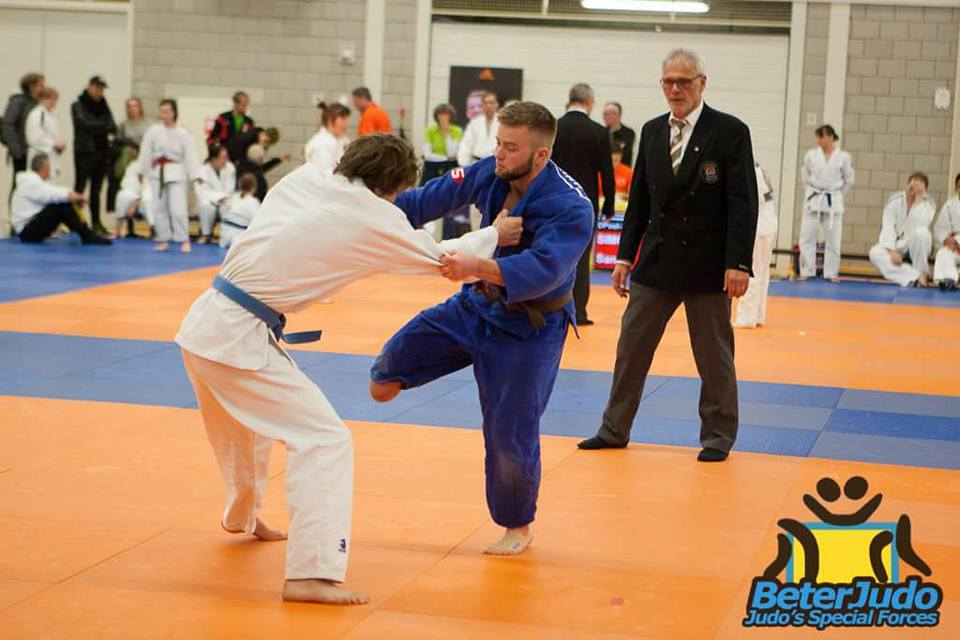 So after so many years of not being a runner or being able to run, why do I do it?