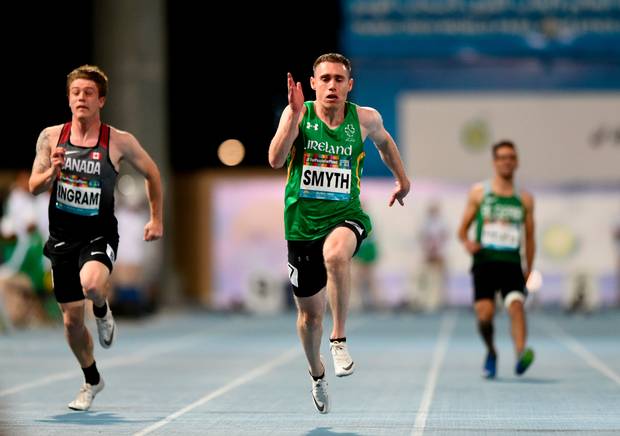 Derryman, Jason Smyth wins gold in the 100m in the T13 class in Dubai in a championship record time of 10.54 seconds. The 32-year-old, who is visually impaired was just .08 off his own world record time, set in London in 2012.

“All of a sudden, you’re crossing the line. It’s a major event and the reality is it’s all about who crosses the line first”, Smyth says.

“These are the moments that we are all looking for and want to be a part of, so you have to enjoy them.

“It’s a championship record. Looking forward, I’m really in a good place to kick on moving into the Paralympic Games in nine months’ time.”

Gold medal number 20! It wouldn't happen without the support of those around me. Thank you! 🏅 pic.twitter.com/ECT5TDPdxh

Although Australian, Chad Perris exploded out of the blocks and contested the lead with Smyth over the opening 40m, the Irishman pulled clear.

Perris finished second in a season’s best time of 10.86, with Namibia’s Johannes Nambala third in 10.98.

The 2018 European champion, Greta Streimikyte, who runs out of Clonliffe Harriers has finished fifth in the T13 1500 final at the World Para-Athletics Championships. Streimikyte posted a time of 4:48:75 to come in fifth in the T13 visually impaired final.

Streimikyte, who had looked comfortable in fourth position until Fatima El Idrissi’s break, was among those who tried to cut into the Moroccan’s lead but with the energy sapped from her legs, she ultimately fell adrift to finish fifth in a time of 4:48:75.

A disappointed Streimikyte refused to blame the Dubai heat for her finish.

“When you are out there you don’t really think about it and I did train a lot during the same period – I tried to adapt as best as I can during the time that I was here. I can’t blame the heat because, at the end of the day, we were all in the same boat,” she said.

The 24-year old Streimikyte, who moved to Ireland from Lithuania in her teens, placed fourth in the 2016 Rio Olympics.

The same year she collected a bronze medal at the European championships before claiming gold at European level two years later.