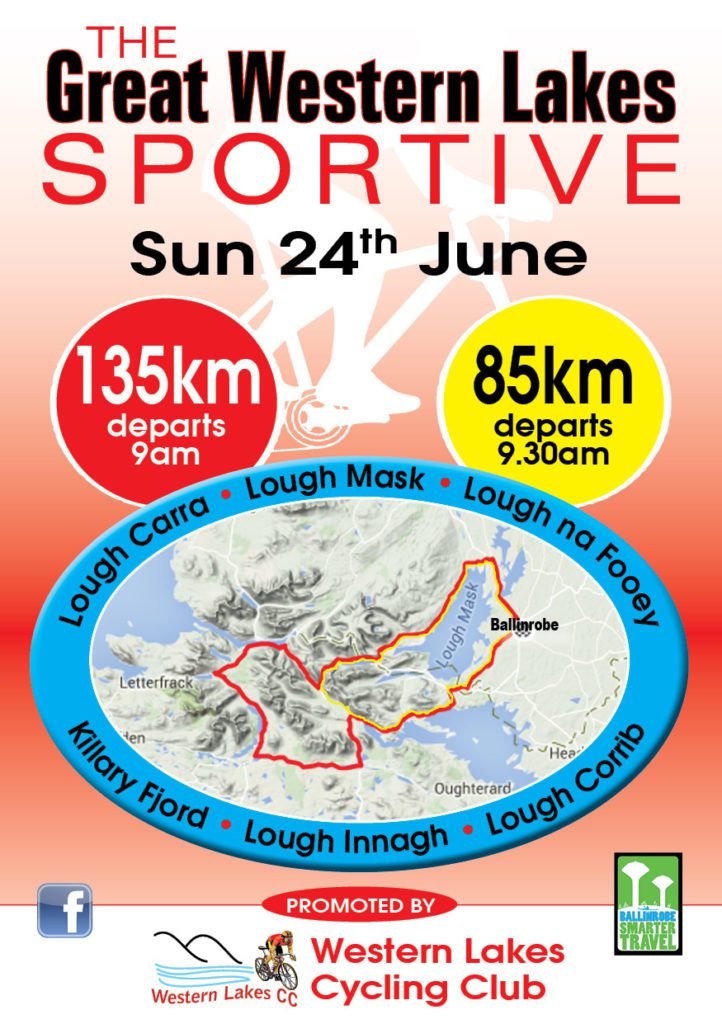 What is the Great Western Lakes Sportif

Route 1, circa 135 km. Starting in the Market town of Ballinrobe, follow the N 84 to Partry, passing Lough Carra on your right.Lough Carra is the largest marl lake in Ireland and is part of the Great Western Lakes complex. It covers 1,560 hectares and is joined to Lough Mask by the Keel River. It has many islands and a rugged shoreline with a plethora of bays and promontories, all on a bedrock of limestone.
After turning left towards Tourmakeady, the vast expanse of Lough Mask appears to your left. Known around the world for its brown trout fishing, the Mask is the 6th largest lake in Ireland.Lough Mask is the middle of the three lakes, which empty into the Corrib River, through Galway, into Galway Bay. Lough Carra flows into Lough Mask, which feeds into Lough Corrib through an underground stream which becomes the River Cong. The eastern half of Lough Mask is shallow and contains many islands. The other half is much deeper, sinking to a long trench with depths in excess of 50 metres.

As we leave Lough Mask, and take the climb towards Maantrasna, on the descent Loch naFooey comes into view. Its name derives from Lake of the winnowing winds, and you will often see spectacular wind tunnels along the water. Popular locally for swimming and fishing, its nearest village is Finny.

A further climb towards Aill Dubh with a spectacular descent.
At the bottom, it’s decision time! left will take you home via Maam, Cornmaona and Clonbur for the shorter 85k distance and right towards Leenane and you are on the longer 135k route so be sure it’s within your range..!!!

Leaving Leenane on the 135k, you will pass Ireland’s only fjord, Killary Harbour. it is simply majestic. an awesome sight on any day.

Further along the road, we turn sharply left into the Inagh Valley. The Inagh Valley has 2 lakes, Inagh and Derryclare, the Twelve Pins of Connemara rising steeply to the west, and the Maamturks to the east. The 2 lakes are connected by a series of rivers and are renowned for their excellent fishing.

Onwards towards Cornamona, we get our first glimpse of the massive expanse that is Lough Corrib. While Lough Corrib is reputed to have 365 islands, a recent more accurate figure from the creator of the charts of the lake is 1327 The most famous of the islands is Inchagoil Island, midway between Cong and Oughterard. It is one of the largest of the many wooded islands along Lough Corrib. The island has spectacular views of the Maumturk range, Joyce Country and the mountains of Connemara. There are some secluded beaches and enchanting woods with a variety of walks around the island. There is evidence of an early monastic settlement which still mostly remains a mystery. There are two churches remaining, Saint Patrick’s and the 12th-century church known as the “saints” church. There are several paths around the island, an old cemetery and remains of four or five cottages which housed the few inhabitants.

The lake continues in our view until Clonbur with only 11k to Ballinrobe and the Finish.