Home Articles Ciara Mageean crowned Athlete of the Year at the 2019 Irish Life... 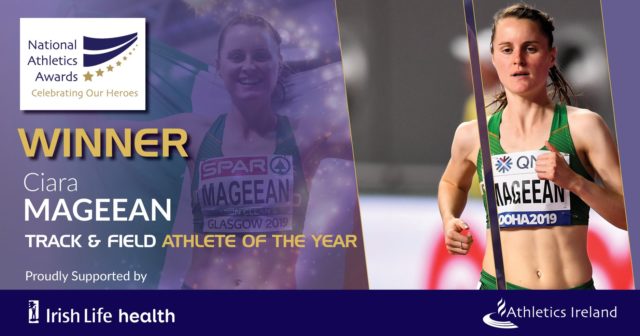 Ciara Mageean (City of Lisburn) was named as the Athlete of the Year at the Irish Life Health National Athletics Awards which took place in the Crowne Plaza Hotel, Blanchardstown today (November 28th).

Mageean took top honours after her 10th place finish at the World Athletics Championships in a world class time of 4:00.15. She also won Track and Field Athlete of the year.

Kate O’Connor (St Gerard’s Dundalk) was named U20 Athlete of year after winning silver in the heptathlon at the European Athletics U20 Championships with a score 0f 6,093 points which was also a national senior record. She fended off a quality category that included European medallists Sarah Healy and Daragh McElhinney (both UCD).

Sonia O’Sullivan was a very popular inductee into the Hall of Fame for 2019. She was the dominant figure in women’s athletics in the world in the 90s with a sporting C.V. to match or better any Irish sportsperson.

While the Irish Life Health National Athletics Awards is a celebration of the many successes of our international and national athletes, it also commemorates the association’s exceptional volunteer base. Nick Davis was named as the Lifetime Achievement Award recipient – the pinnacle volunteer award while Bernie Dunne won the Outstanding Official of the Year.

Jim Aughney was the recipient of the Special Recognition Award for his services to the sport as race director of the Dublin marathon. Aughney, a member of Civil Service Harriers, will be quick to mention his loyal team of volunteers on the committee but he has helped steer the race through testing waters and it now sells out at 22,000 runners and hosts the national marathon championships.

Sean Egan (Donore Harriers) received the award for services to coaching. Egan has been seamlessly involved in hammer throwing from the time he won the 1973 junior BLE championship to currently coaching one of Ireland’s most talented throwers Adam King – along with helping countless others down through the years.

Liz Rowen, Head of Marketing of Irish Life Health commented: “Irish Life Health is delighted to once again support the National Athletics Awards. The awards give us the opportunity to celebrate sporting excellence in Athletics, as well as recognise volunteers who work tirelessly to give both children and adults the chance to take part in athletics and be active”.

CEO of Athletics Ireland, Hamish Adams: “The awards not only allow us to celebrate the great performances of our athletes over the course of the year, but it also gives Athletics Ireland the opportunity to formally acknowledge our coaches, officials and clubs for their enormous contribution to the success of our sport.

We wish all our athletes success at the forthcoming European Cross Country Championships, and we look forward to ensuring that we too deliver a world class experience for both athletes and spectators when we play host to the event in 2020.”

President of Athletics Ireland, Georgina Drumm, added: “Our talented athletes gave us great performances in a year to remember, with medal success at European Indoors, European Under 20 and Under 23 Championships, and World Universities to name but a few.

These awards give us the opportunity to acknowledge these performances, but also offer us the chance to thank our coaches, clubs, volunteers, and long-serving members of our athletic community who give enormously to our sport each year.”

Athlete of the Year: Ciara Mageean (City of Lisburn)

U20 Athlete of the Year: Kate O’Connor (St Gerard’s Dundalk)

U23 Athlete of the Year: Eilish Flanagan (Carmen Runners)

Official of the Year: Bernie Dunne

University Athlete of the Year: Marcus Lawler (IT Carlow/SLOT)