We at An Ríocht Athletic Club are delighted to launch Kerry’s biggest international sports event the Lee Strand Ríocht International. Again, this has been made possible by the generosity of Lee Strand who are now sponsoring the event for the third year. This year will see the most impressive fields of athletes ever to come to the county with Olympic finalists and European medallists from over 12 different countries taking part.

The events profile has been rising over the past two years following some very favourable feedback from the athletes who have competed here, many of whom have achieved personal best performances here.

Present, at the launch of the event were three of the international athletes who will compete in Castleisland on July 2nd, John Woods, USA, Eric N’Dri, Ivory Coast and our own Eoin Leen. John won the 100m here last year and holds the stadium record with a time of 10.43, he will be hoping to improve on that this year following some excellent performances running 10.16 and finishing 5th in US indoor championships. Eric has a personal best of 10.17 for the 100m and they will compete against Chris Johnson, USA a 10.21 100m runner and Jer O’Donoghue from the host club An Ríocht who will be hoping for a fast time on the night. Paul Hession who broke the Irish record recently is also a possible starter in the 100m.

The Men’s discus is shaping up to be an excellent competition with Hannes Hopley, RSA, who has been world junior champion and current US College’s record holder with 67.66m. Hopley will compete against last years winner Nick Pettrucci, USA and Eric Cadee, Holland both 60m plus throwers. Eoin Leen will be hoping that this competition will push him to a season’s best performance.

Another huge attraction will be the women’s high jump with Maresa Cadienhead, one of Canada’s best high jumpers with a personal best of 1.95m she will face Russian athlete Tatyana Grigoryeva a 1.96 jumper.

The men’s 400m will have world indoor bronze medallist Paul McKee from Belfast and Brian Doyle competing against 2007 South African champion Jan van der Merwe.
In the women’s sprints all of the leading Irish athletes including Ciara Sheehy and Ailish Mc Sweeney will offer a stern test to the international athletes.

The women’s hammer has the potential to be a cracker with Eileen O’Keefe, who has taken Irish hammer throwing to a new level. Eileen will face stiff competition from Susanne Keil of Germany who was a fifth place finisher at the 2003 world championships and has already thrown over 70m this year. Another Olympic Finalist Andrea Bunjes Germany who has thrown 69.91 this year and PB of 70.73 will also throw in this competition, which is sure to be very exciting indeed.

We are very happy to have former European Indoor Champion Mark Carroll of Leevale A.C. leading the Irish challenge in the Denis Twomey Mile. Mark is a legend of Irish athletics having run 3.50 for the mile and just over 13 minutes for the 5000m will face a strong field, which will include one of Ireland’s latest sub four-minute milers Liam Reale of Limerick as well as Max Smith of New Zealand.

We are very lucky to be in a position to host such a high-class event in County Kerry and again we would like to thank our sponsors Lee Strand who have helped immensely in making this event possible. 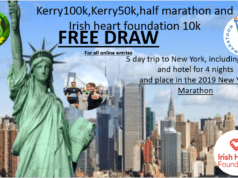 Win an Entry to the TCS New York Marathon