Healy continues to impress and sped to a new championship best performance of 52.81 in the women’s 400m which bodes well for the European Indoor Athletics Championships in Glasgow in two weeks.

Sophie Becker (St Joseph’s) produced another sub 54 second clocking in second in 53.95 and that should also rubber stamp her selection on the Irish team. The team is being selected and finalised this evening and will be announced on Monday morning (February 18).

Cillin Greene was the fastest qualifier going into the men’s 400m final but with Thomas Barr (Ferrybank) on his inside in lane 5, he was far from the favourite.

Greene is a physically raw talent and has shown inexperience in this event but he bolted from the blocks and clear from the melee that was set to ensue behind him at the break as he won in 47.19.

The Galway sprinter may have been wondering what was going on behind him at the break but he couldn’t possibly imagine the entanglement that saw Thomas Barr exiting the race at the halfway point.

Barr, and Brandon Arrey (Raheny Shamrock), felt the brunt of Andrew Mellon (Crusaders) as he fought for position to wedge himself out of danger. This saw Barr careering to the right and out of the race with Arrey ceding control to Mellon in second – he held on for silver in 48.02 with Arrey third in 48.15.

There were no shortage of sprint stars on day two with Molly Scott (SLOT) starring in the women’s 60m and 60m hurdles.

Scott was edged in an exciting duel with Kate Doherty (DSD) in the sprint hurdles. Doherty won in 8.29 to Scott’s 8.36.

The Carlow sprinter wasn’t deterred though and produced a brilliant race in the women’s 60m final with a personal best of 7.32 seconds to strike gold – her first national senior title. Ciara Neville (Emerald) was right on time in second place in 7.40 – bang on the Athletics Ireland European Indoor standard. And it was Patience Jumbo-Gula (St Gerard’s Dundalk) that came third in 7.44 – making it three of the world U20 relay silver medallists on the senior podium.

Another member of that squad was Rhasidat Adeleke (Tallaght) and she was a facile winner of the 200m in 24.13.

On the men’s side it was Jospeh Ojewumi (Tallaght) who held on for a good win in the men’s 60m in 6.78 seconds with the fast finishing Marcus Lawler (SLOT) just falling short of gold and the European indoor standard with 6.79 – 6.78 was the marker he was looking for. Dean Adams (Ballymena &Antrim) was third in 6.88.

Mark English (UCD) makes everything look easy when he’s on form and he displayed all those qualities today to win his 6th national indoor 800m in 1:51.77 from Zak Curran (DSD) in second in 1:51.91. Curran came up to his shoulder briefly in the straight with English upping the ante slightly to cruise to victory. Conor Duncan (Ratoath) was third in 1:53.00.

Most unexpected victor of the day was Eoin Pierce (Clonliffe Harriers) who surprised the crowd, and himself, for an excellent win in a tactical men’s 1500m in 3:55.54 from Eoin Everard (Kilkenny City Harriers) in 3:55.79 and defending champion Kieran Kelly (Raheny Shamrock) in third in 3:56.48.

In the women’s pole vault, Clodagh Walsh (Abbey Striders) was a good winner with a clearance of 3.60m from Ciara Hickey (Blarney/Inniscara) with 3.50m and Orla Coffey (Carraig na Bhfear) with 3.20m.

This was Aston’s second bronze of the championship having finished third in the pole vault on day one. The multi-eventer had one last trick up his sleeve and rounded out the championships as the final competitor to win gold in the high jump with a clearance of 2.00m.

Shane Howard (Bandon) impressed earlier in the day to win the men’s long jump with 7.44m.

Sean Breathnach led a clean sweep for Galway City Harriers in the men’s shot put to win his 8th indoor title with a best of 16.22m. Brendan Staunton was second in 12.97m with his brother, Michael Breathnach, third in 12.65m. 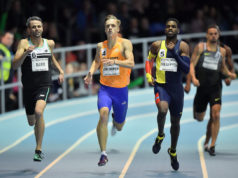