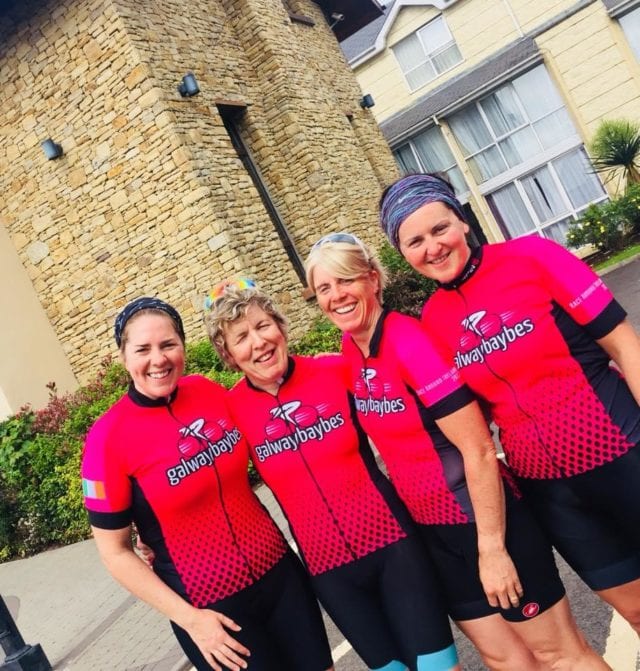 Less than 12 months after their record-breaking performance in the 2,250km Race Around Ireland, the Galway Baybes are gearing up for their next bike racing challenge in the Donegal Atlantic Way Ultra 555k Race starting this Friday.

The team of cyclists, all members of Galway Triathlon Club are Marie Boyle, Karen Cassidy, Bríd Ní Neachtain and Joanne Murphy, will be supported by a crew of six on the road including Jonathan Gibson, Padraic Benson, Pat Dirrane, Patrick Mc Nicholas, Pat Dowd & Michael Casserly.

The four female cyclists will toe the start line of the Donegal Ultra against two other 4 person female teams from Cavan and Meath along with 38 four person male teams.

The route will see them start in Letterkenny on Friday afternoon at 3pm where they will make their way up around the coast of Donegal to the Inishowen Peninsula and back into Letterkenny where they will then circumnavigate the coast of Donegal taking in some amazing climbs and breathtaking views around Fanad Drive, Horn Head and Glengesh before returning to Letterkenny via Ballyboffey and the Barnesmore Gap. The cyclists will climb almost 6,500 metres in the 555k race, the equivalent of summiting Croagh Patrick 8 times.

Marie Boyle who is from Gweedore said after the team training weekend in Donegal a couple of weeks ago ‘It’s the first time I’ve seen a lot of the county, I’ve cycled areas close to my home but never realised the county was so beautifully breathtaking. I can’t wait to race around my home county with my adopted county teammates.’

The participants have 40 hours within which to complete the race, the current race record for a 4 person female team is 19:42 minutes set by a very strong team of females last year, their time will be hard to beat.

All eyes will be on completing the race as quickly, safely and as efficiently as possible.  The team have enlisted the help once again of Jonathan Gibson as coach and brought on board Louise Sharkey of Vita-Nutrition as team nutritionist.

Speaking about the adventure ahead Joanne said, we are excited to get this race started, we’ve been training hard over the winter months fine tuning our strengths and biking abilities, making improvements from our Race Around Ireland performance. This event is a different style of racing to the Race Around Ireland. It’s go hard from the start, leaving it all out on the road without wasting a precious minute. There are some epic climbs ahead for the team and we are ready to tackle the hills of Donegal.

Karen said  ‘This race is going to be very tight in our category with a great battle on the bikes expected not only between the female teams but also the men’s teams. We are ready to race and relishing the opportunity to do what we love and are looking forward to seeing how the race unfolds, there is great excitement in the team in the build-up to the race’

Speaking about the costs of putting the race team on the road, Bríd said ‘We are grateful to the businesses who are supporting us this year, it gets expensive to race in these events and we are very thankful to our generous partners with a special mention to Lifes2Good Foundation who joined us this year along with Texaco, Supermac’s, Cogaslann Agatha, Future Financial,  Ocean Fitness, Western Motors, The Athlete Clinic, Vita Nutrition, Solution 2D, Divilly Butchers, Runireland.com & Tri Talking Sport.

The Galway Baybes will start their Donegal Ultra Race at 3pm this Friday afternoon, you can track their progress here, and follow the race on Facebook and Twitter.