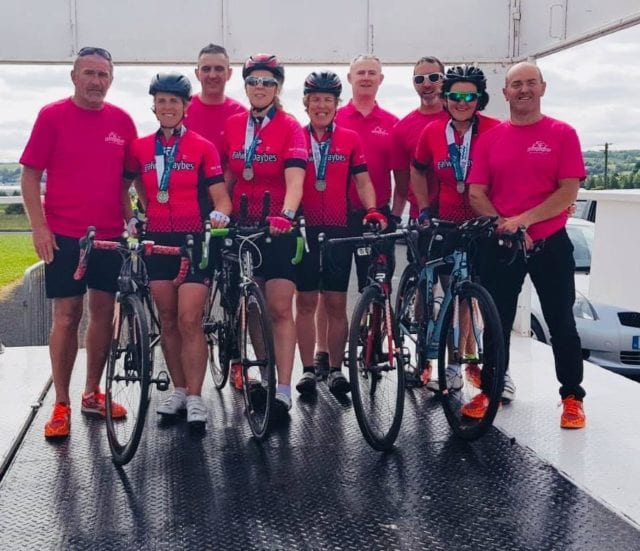 The Galway Baybes exceeded all expectations in Donegal last Friday and Saturday when they took on the Donegal Atlantic Way Ultra, their second ever ultra cycling endurance race.

The team of riders, all members of Galway Triathlon Club, set a new course record for the 555k distance, winning the women’s four person category in a time of 19 hours and 24 minutes.

Less than 12 months after their record-breaking performance in the 2,250km Race Around Ireland, the team had one focus in mind when starting out on the 555k bike race at 3pm on Friday from Ballyraine Halls: to ride as hard and as fast as they could for as long as they could, and get to the finish line in the quickest time possible.

The team of riders Bríd Ní Neachtain, Karen Cassidy, Joanne Murphy and Marie Boyle, were supported by a crew of six on the road; Jonathan Gibson, Padraic Benson, Pat Dirrane, Patrick Mc Nicholas, Pat Dowd & Michael Casserly with lots of support at home and abroad following the tracker and ‘dot watching’ in eager anticipation of a great performance by the team. Spurred on by the support and the almost perfect racing conditions in Donegal, the team gave it everything they had to bring home the win and the record to Galway.

With two other four-person female teams in the category, Skyway Moynalty and Virginia Vellobellas along with thirty-eight men’s four-person teams, the Galway Baybes put their mark on the race within the first hour recording a 34kph average before hitting the undulating climbs and hills up around the Inishowen Peninsula on stage one of the race.

By the halfway point the Baybes had been racing for 9 hours and 30 minutes and had built up a comfortable lead over their nearest rivals. In the closing stage of the race the team, not content with just winning their category, dug deep to reel in a course record, beating the previous record by 19 minutes. Pushing right to the last second it was Marie Boyle, originally from Gweedore, Donegal who crossed the line sealing the course record and win for the team. 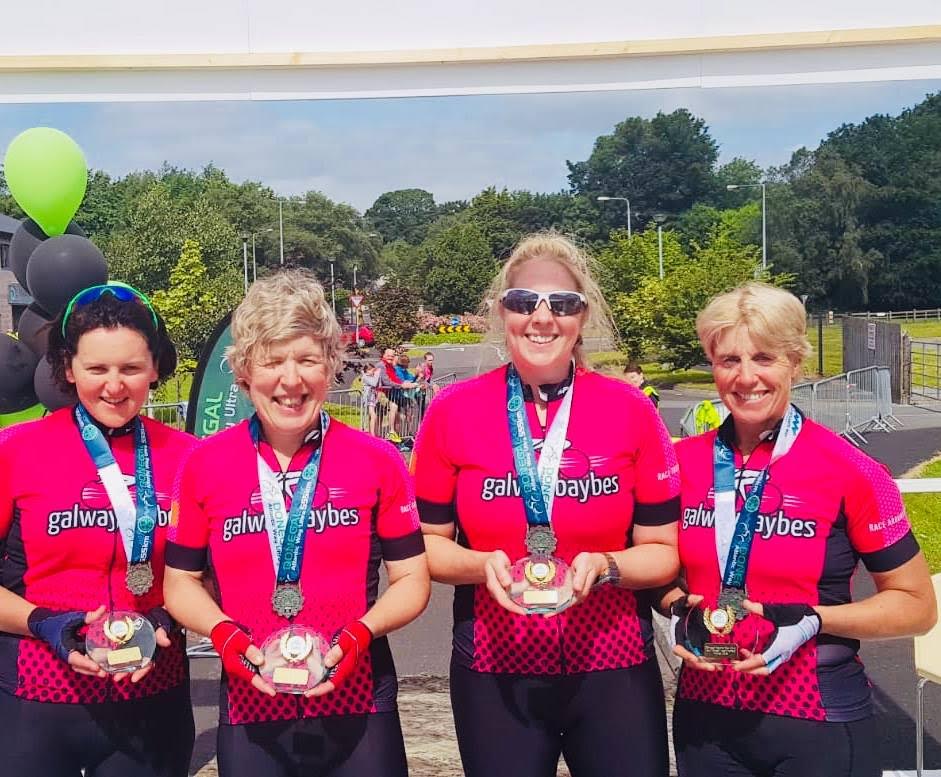 There was much excitement, emotion and elation on the finish line for the team of riders and crew who delivered a superb performance, pushing their minds and bodies to the max from the get-go. The sense of camaraderie in the team and the support for each other on and off the road was immense. Their focus, commitment and determination shone through from start to finish.

Having achieved such an amazing result, the Galway Baybes look forward to their next challenge: “We have nothing planned for the moment – we have had a whirlwind 10 months with one win and two records from two races. We are going to enjoy the summer and support our two riders and three crew members who will race at IRONMAN Barcelona in October, then we’ll look at the options for the next adventure. Hopefully in the meantime we will have inspired a few more ladies to take up endurance racing”.