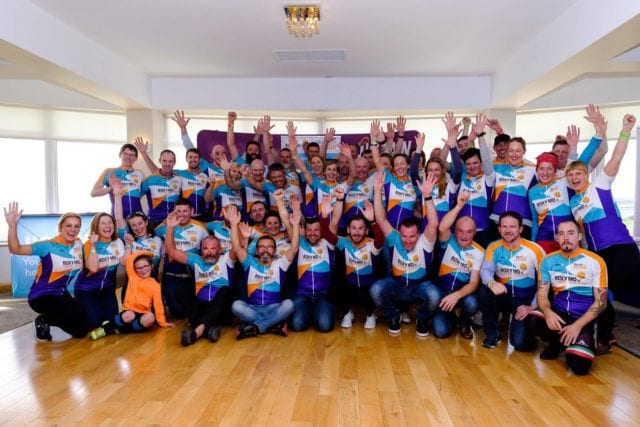 The Boxymo Giro D’ Jigsaw started out as a 380km Tour of Galway in 2014, limited to 40 riders the event took in the circumference of county Galway over two days.  Riders enjoyed the perks of being in a controlled cycling pace environment spred over two groups with food stops, accommodation, meals and massage all part of the Tour Experience for riders and crew.

In 2017 the event expanded nationwide to travel from Galway to Dublin return, visiting numerous JIGSAW hubs along the route over 3 days covering 480km of road.  This year’s event, the fifth year of the charity cycle, took place across the weekend of the 28th – 30th September and saw 48 riders along with 12 crew travel the distance in glorious autumnal weather.

Gary Cullen from Navan sent us in this report on his experience of the Giro D Jigsaw 2018, his second time completing the epic charity cycle. 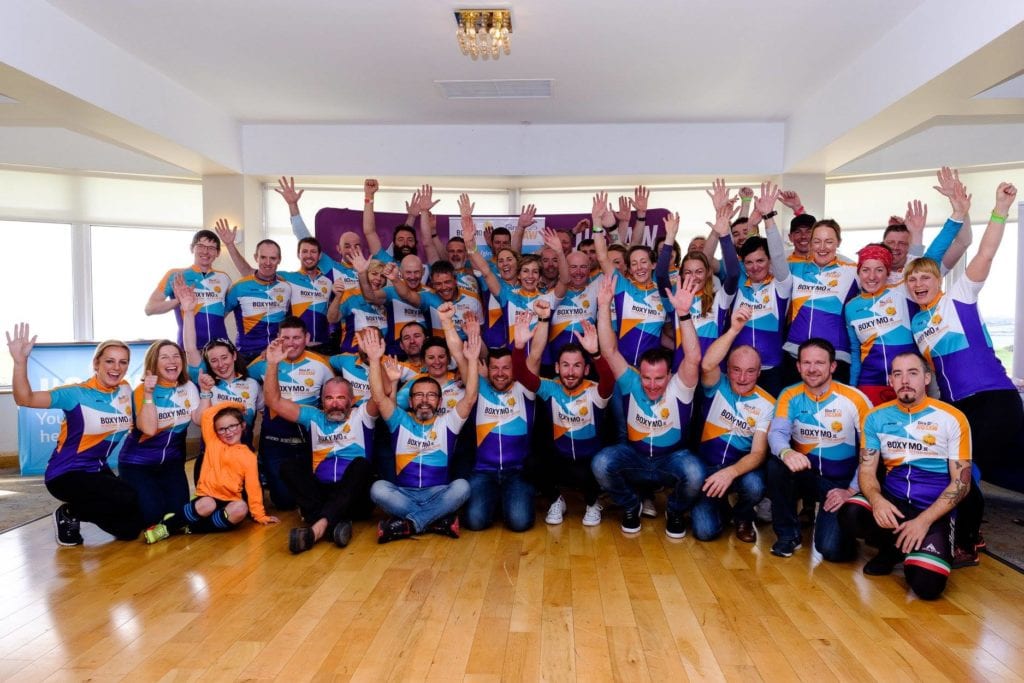 ‘So it’s Thursday night, the bags have been dropped off and registration is complete. I thought I would be less nervous seen as this was going to be my second year taking part in this awesome event but I’m just as jittery as I was last year. I can’t fall asleep.

Friday morning rolls around far too quickly, up at 6:15am for breakfast and my body doesn’t understand what’s going on. It’s about 4 degrees outside and still dark. I make my way to the starting point at Galway Bay Golf Resort outside Oranmore. I am immediately regretting my decision to wear a skin suit on stage 1 but with my overnight bag already checked in I have no option to change into more layers now. The atmosphere inside the clubhouse was electric, everyone was introducing themselves and chatting away as if we all already knew one another. It was a nice feeling as everyone felt included, especially the first time participants who didn’t know what lay ahead of them.

The first group took off albeit we were all a little behind schedule. I remained indoors in the warmth nursing what felt like possibly my sixth cup of coffee. We eventually got the green light from the boss lady Joanne that it was time to mount up and ready to rock and roll. No going back now. The day warmed up pretty quickly with some nice sections that the group picked up some decent pace on. With 191km on the cards for stage 1 we couldn’t afford to hang about and we rolled up in Navan just after 5pm the first day. Yeah so we were behind schedule but these things don’t bother you in the moment and we just got out there and enjoyed it.

Morning of stage 2, surprisingly feeling super fresh and rested. I immediately knew the body was far better prepared and stronger for this year. I was super excited and couldn’t wait to get going. I also made sure that I wrapped up well for today as it was another early start with the morning only hitting approx. 3 degrees outside.

I met a gentleman named Declan who was new to the event and I could see when we went outside that he was feeling the bite in the air and trying to decide how to wear his neck warmer to get the most from it. A tip someone had given me the year before and I thought this is what it’s all about, getting to know one another and sharing advice when we can I advised how he should wear it and I think I can speak for him when I say he was extremely grateful. 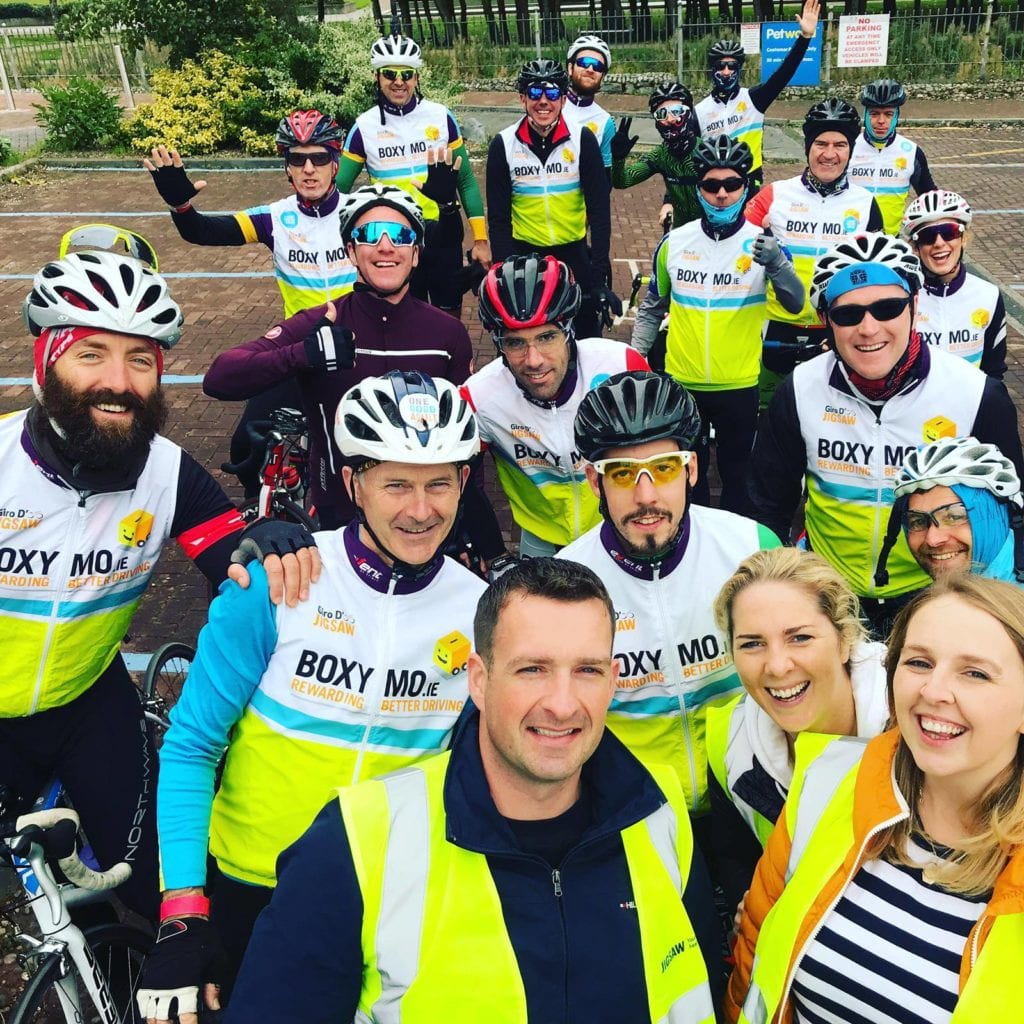 Stage 2 didn’t bring anything overly exciting apart from the occasional slagging that we couldn’t catch the slower group that left ahead of us. 176km into Tullamore on the Saturday evening and you could begin to see fatigue setting in with some of the guys but spirits were still high. Everyone was looking forward to a big feed and some much needed R&R in the hotel. For some this feed came in the form of many pints of porter but that’s half the craic when not out on the bike.

Sunday morning and the final stage of this year’s epic Giro D’Jigsaw. A nice leisurely 115km to go and at this point felt nice and short for everyone in comparison to the first two monster stages. Few sore legs and a few more sore heads all lined up for the off outside the hotel but everyone was still smiling.
All I can remember is that anything was better than 2017 when we were starting and the wind and rain would scare even the most hardcore cyclists away. Only a quick sugar stop over 30km up the road, a flying lunch break and it was the home straight. There were guys suffering on the last leg between Loughrea and Oranmore but we knew if we were going to get hit with a huge headwind it would be there. We all pulled together and soldiered on and absolutely nobody got left behind. We joined up with the larger group further up the road and all finished the Sunday final stretch together.

It was just brilliant and had a smile from ear to ear. Would I recommend this event to someone, absolutely for sure and I already cannot wait to come back next year for my third installment and once again become a #GiroHero.’ 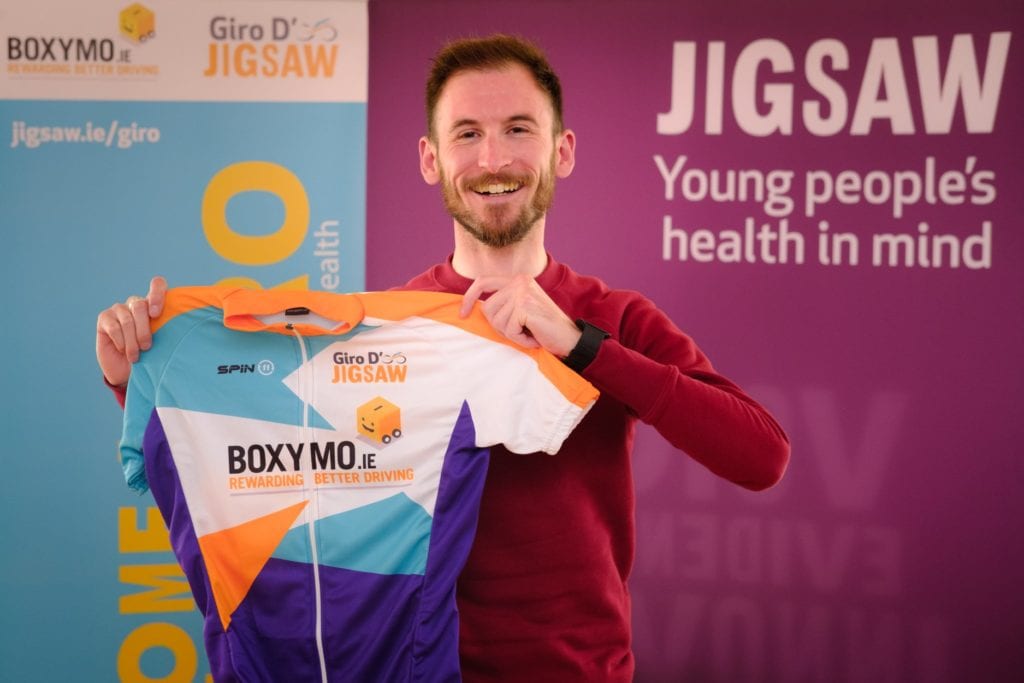